Ghost towns, Dredging, and the Wilderness of No Return - Custer, Idaho 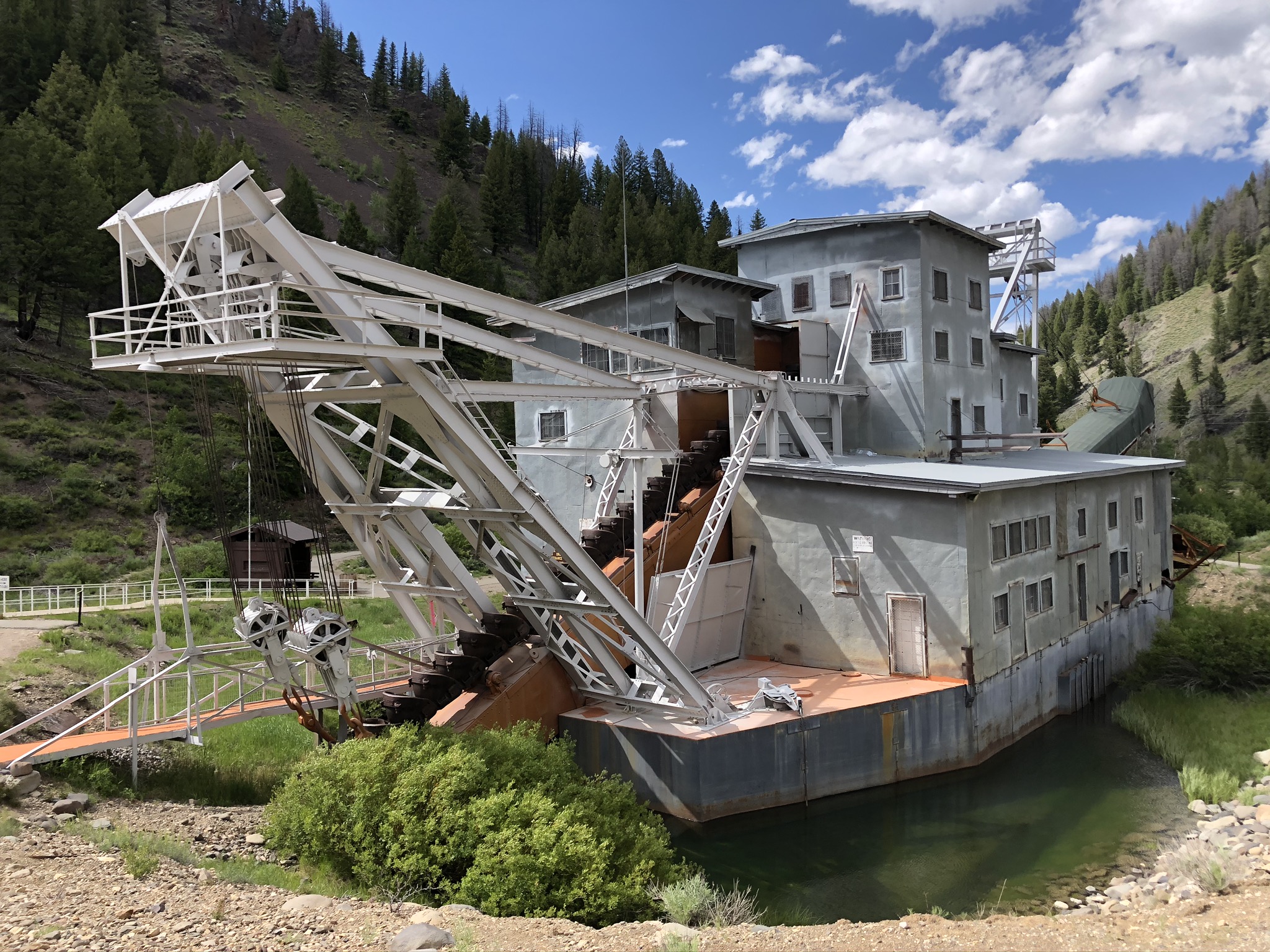 We decided to head north for our extended 4th of July weekend. It’s one of the busiest weekends in our area as everyone heads out to the Wood River Valley and Stanely Basin. Our goal was to head up past Stanley to camp near the Bonanza and Custer Ghost towns.

After a couple months of lockdown, it seemed like the entire area came out to the Stanley Basin. There were more RVs, campers and tents than I have ever seen in and around Stanley. It’s popular this time of year but it seemed more popular than ever. We checked several camp grounds but finally picked Flat Rock campground north of Sunbeam, Idaho.

There is a little cafe and some hot springs near by. We were about 20 minutes from Stanley. Our campground had no privacy and was right on the road that led to the gold dredge, Bonanza and Custer. That said, it was perfect. It was quiet at night and even had a pit toilet and stream across the road.

We were also close enough to Stanley for me to run in and get some essentials while Sarah mountain biked. The view from Lower Stanley always takes my breath away.

We decided to visit the Yankee Gold Dredge on our second day. The gold dredge was about 5 miles from our camp ground. The road wasn’t paved but was in very good shape and our Subaru made it up there with no problem.

It was active during the middle of the last century and destroyed a large portion of the Yankee Fork of the Salmon River valley. There are tailings from the mining operation for about 6 miles.

It mostly looks like large piles of rocks on either side of the road.

A gold dredge works by floating in a self-made pond and working its way up a river. It digs deep in the group in front of it, processing the material and spitting it out the back as tailings. The Yankee Fork Gold Dredge dug about 35 feet into the ground and required about 11 feet of water to float.

The machine itself was pretty impressive and you can tour it in the summer.

The entire machine was anchored to the river bed with a large spike and would swoop back and forth churning up the ground as it went. Once it had completed a swing, it would move up the river.

The entire gold dredge was powered by large diesel engines that powered numerous electrical motors found throughout the rig.

The entire purpose of the gold dredge was to find gold within the material it was churning and sifting. There were large gold sluice boxes where the material would collect and then be sold to the US government.

Only the manager of the dredge had access to the gold sluice room.

Overall, I would totally recommend the gold dredge tour. It was well worth the $5 dollars.

The Bonanza Ghost town is actually before the Yankee Fork Gold Dredge when heading north. The town itself was established for workers of the dredge.

There isn’t much to the ghost town but you can see the buildings from the road. The buildings are all marked private property so you can’t really get too close without trespassing.

As you drive through the town, you’ll see signs for a guard station, a camp ground and a cemetery. We decided to visit the Bonanza cemetery to see what it was all about.

It was very old with many unknown grave stones. It was erie walking through it. We also went to visit the Boothill cemetery outside of town. This cemetery has some dark history behind it with some conflicting tales on how the residents died. Apparently, the rest of the town didn’t want to be buried near these people.

After visiting Bonanza, we took a ride further north to the Custer Ghost town. This mining town was booming back when it was active. This ghost town has been turned into a tourist attraction. There is a walk you can take with lots of signs about the history of the area.

The center of town has many buildings and old mining antiques that you can check out.

There are a bunch of buildings you can actually go in and see many of the relics of the town. I can’t imagine having my teeth drilled with this.

It was very busy when we were there. There was hardly any parking left by the time we decided to leave. They do have really good homemade ice cream available at the general store.

We headed north a ways to check out the old mine site. There is still a very large structure that is visible from the road.

Frank Church Wilderness of No Return

The next day, Sarah went biking again and our friend Aaron came out to visit. I had shoulder surgery a couple months ago so I couldn’t ride my mountain bike yet.

We hung out in the stream north of Custer. It was a very beautiful area with ample camping. It was, again, very busy.

On our way back to camp, we decided to head down Loon Creek Road. It’s just north of the gold dredge and south of Custer. It heads into the Frank Church Wilderness of No Return.

The road was very wide as it made its way past an active mining operation that is currently topping the mountain northwest of the dredge. It was quite the operation. We then climbed about 2500 feet from the valley floor to overlook where we had come from.

It was an awesome view. The road was steep but well maintained. It’s probably possible to drive it was a car but I would recommend a truck with some clearance.

We finally made it to the summit and looked over into the most remote wilderness in the lower 48.