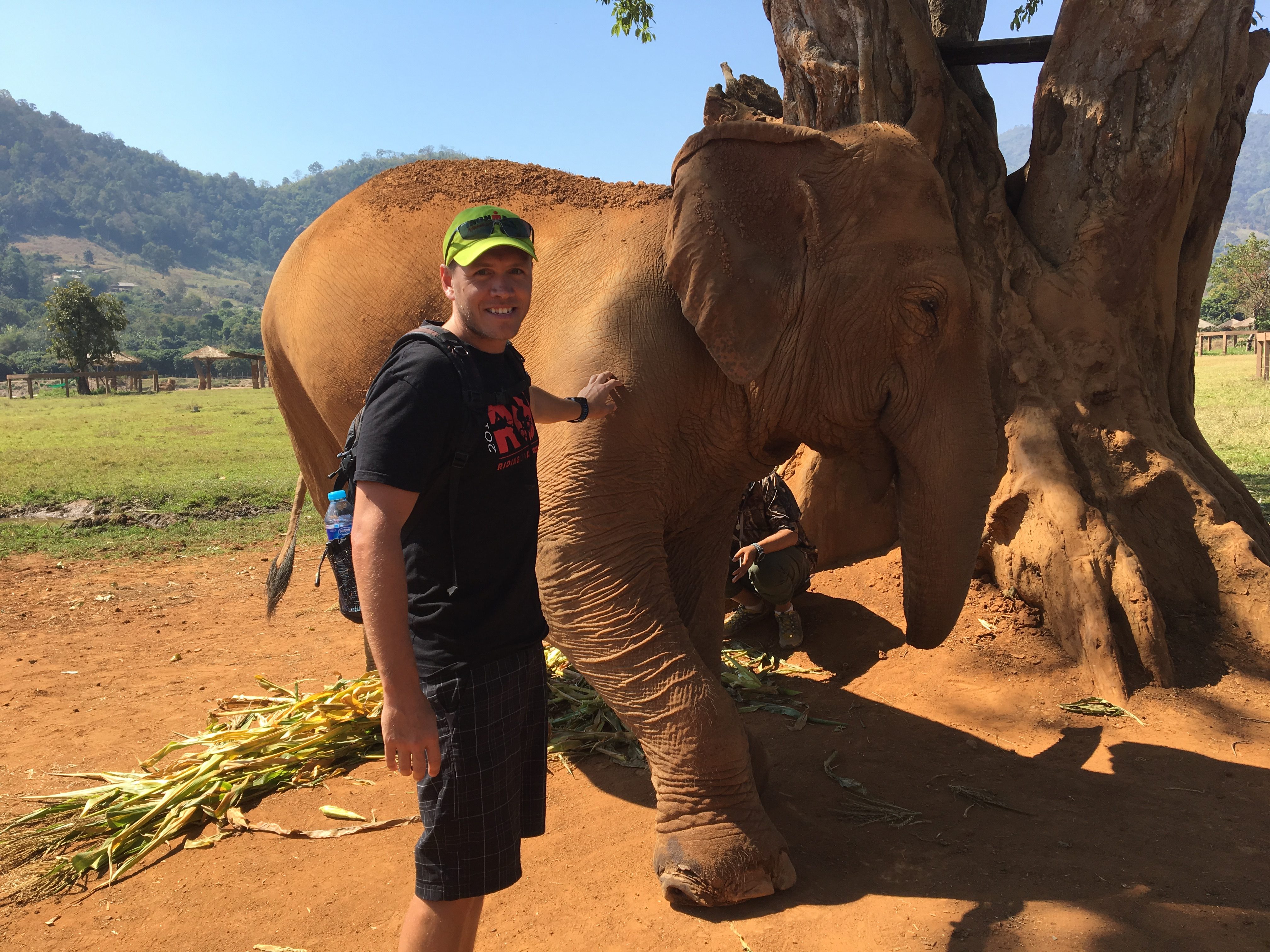 Nestled between a lush mountain range about an hour and a half north of Chiang Mai resides a 250-acre sanctuary for elephants and many of their smaller friends at the Elephant Nature Park. Several weeks before heading to Thailand we reserved a spot on a tour to the park. We were surprised to find the full day trips completely booked even though we were still a couple weeks out. The short trip is the same price (2500 baht or about 75 USD) but is only about 5 hours rather than 8. We registered for this and put it on our calendar.

The tour departs from downtown Chiang Mai where you meet at the local office and jump in a van that takes you to the park. During the ride, they play a documentary about the Thai culture surrounding the elephant and why there is a need for a such a park. More elephants are in captivity in Thailand than in the wild. They are most often used for riding, circuses and even begging in Bangkok.

Up until the late 1980s, elephants could legally be used in the lumber industry but they often suffered great abuse and the practice was outlawed. Many still use elephants illegally to move trees out of the forest. The documentary made you aware of the mistreatment of the elephant throughout the country and how the park has been setup to rescue elephants from these conditions.

The park typically takes in a single elephant at a time and purchases them legally from the riding camps or circuses so they can live as freely as possible in the park. They currently house 71 elephants. Many are blind, crippled or fearful of humans. Some are aggressive and need to be housed in large pens like the T-Rex enclosure in Jurassic Park.

As you approach the park you pass several elephant riding camps. They were packed with tour buses. We saw up to 3 tourists at a time on an elephant in addition to a large metal saddle and their trainer. It was frustrating to see that happening so close to the park and right after watching the documentary.

Once you arrive at the park you’re given a little bit of an overview of the grounds and what you’ll be doing. Our guide, Tim, spoke great English and was extremely knowledgeable about elephants and the park. The first activity you get to partake in is feeding the elephants watermelons. You’ll stand above them on a platform and hand them watermelon halves as they grab them with their trunks. It was very fun and the elephants couldn’t get enough. Tim said that could only eat so many watermelons because they can develop diabetes from eating too much sugar.

We then walked out onto the unfenced land where the elephants roam. They are free to walk the grounds but typically form packs based on their demeanor and physical limitations. Some elephants are blind and have helper elephants that will lead them around. Other elephants are crippled from logging accidents or overbreeding and tend to stick together. There was also a family with a couple babies in the group. We had a chance to get close to the elephants and pet them as well as feed them corn. They eat for 20 hours a day so there is always time to feed an elephant.

After visiting with the elephants for a while, we were given the opportunity to eat. We didn’t eat for 20 hours but the food was tasty. We checked out the cat kingdom on the premises. The cats live in an enclosure right near the entrance to the park. They are all rescues and were all very friendly and wanted to play. In addition to cats, there are all kinds of water buffalo and dogs roaming the park. We spent some of the lunch hour hanging out with a couple of the lazy dogs.

After lunch, we went to visit more elephants and learn about how they got there. It was quiet the experience to be so close to such a large animal. We also followed the family of elephants down to the river where they cleaned up. It was dry season so the trainers flung water over the elephants because the larger ones could not completely fit in the river.

After the water bath, the elephants took a mud bath. They roll around in the mud to keep them cool and protect their skin from the sun. It was hilarious to see the baby playing around in the mud and messing with his family members.

I would recommend that anyone visiting the Chiang Mai area take a day and visit the Elephant Nature Park. It was educational and a lot of fun for cheap. I think the 5 hour short visit was more than enough time. With the longer visit you get to bathe with the elephants but the 5 hour tour was more than enough time with the elephants and we were ready to move on to other activities.