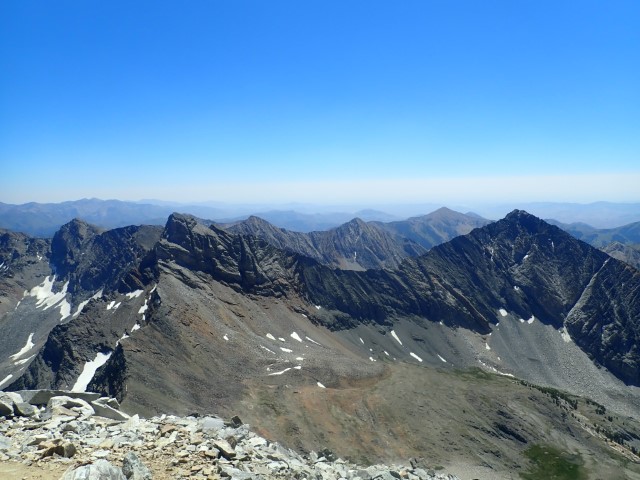 This past Sunday we decided to take a trip out to Hyndman Peak. Once before I had tried to summit the peak but failed because I lacked the guts and experience to make it to the top. We succeeded Sunday in making it to the top.

You’ll need to drive out East Fork Road from Highway 75. Head through the town on Triumph and onto the dirt road the follows. You will turn on Forest Road 203 to follow Hyndman Creek road to the trail head. We’ve managed to take this road before in our Subaru but we road in our friends Ranger this time. The road was much more rough than last year so it was nice to have some more clearance.

The hike from the trailhead to the Sundance Lake is well defined and heavily traveled. The Pioneer Yurt is located on the way so you’ll likely run into a lot of people on your way up. The first three miles are very gradual and through the tree. It’s pleasant walking. The wild flowers were peaking while were there. It was pretty beautiful.

After the three miles you will begin climbing. Over the course of the next 2.5 miles you’ll transition steep climbs and some more gradual meadows. Hydnman will come into view and it will get increasingly dramatic.

You’ll eventually reach Sundance Lake. There is a small sign denoting it as such. It’s situated beautifully under the towering mountains around you. Again, the wildflowers were in full bloom for us.

After passing the lake, you’ll continue down the path. You are heading towards the shoulder in front of you. There will be cairns making the trail but they are kind of scattered all over the place. We headed too far left and into the scramble at the base of Hyndman. There is a much flatter and more direct route if you stay to the center of the shoulder in front of you.

Once you reach the shoulder you will have a fantastic view of the next valley over. It’s not as colorful but pretty dramatic.

You will want to follow the shoulder up and to the left (or north west.) There will be a somewhat defined trail that primarily follows the edge of the ridge. We found that following the ridge was the most stable. If you head to your left too much, you’ll be on an unsteady boulder field that is a little harder to walk on. The ridge is a bit scary for someone with a fear of heights (me) since it has a very steep drop to your right but there is enough room to walk comfortably.

You’ll have to scramble a bit on rocks as you go but it’s never very difficult. We just took our time and tried to stay out of each other’s way. I used Gaia pretty regularly to make sure we were point towards the top but you’ll eventually just see your destination so it’s pretty clear where to head.

We stopped to have lunch and I managed to drop by Olympus Tough TG-5 down this section of the rock. It fell about 30 feet and bounced off several rocks. It didn’t break and only had some minor scratches. I was pretty impressed. I took all these pictures with it.

From the top, you have a pretty killer view of the surrounding area. You’ll be at about 12k elevation and higher than anything around.

We packed it up and headed back down. We got a little off track on the descent and ended up in the boulder field. It made for some slow going but at no time did I feel unsafe. I took a bunch more pictures of the mountains and flowers as we made our way back to the truck. 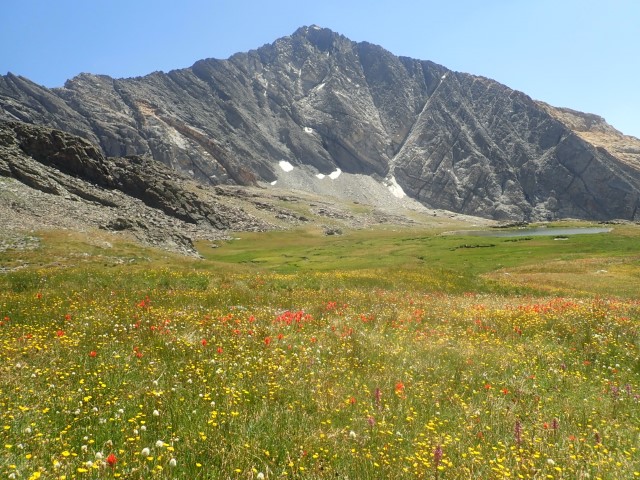 The hike felt like a lot more work than I had thought it would be but I would definitely recommend this to anyone that is looking for something to do in the Sun Valley area.