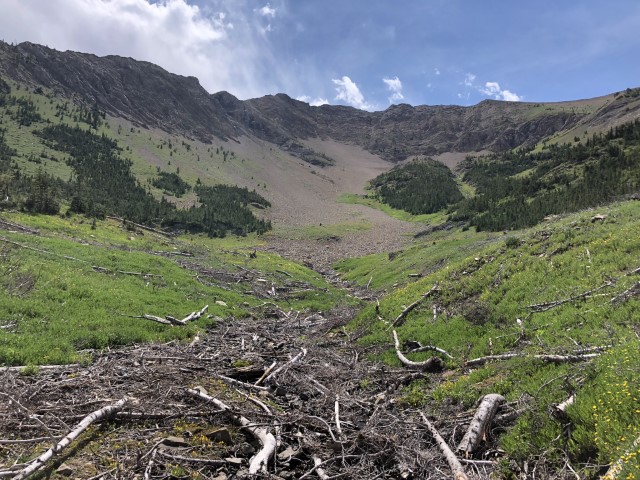 We’ve officially started our Tour De Idaho! We helped a friend move condos in Elkhorn and then hit the road. We have a car filled with camping equipment, two humans, a dog and three bikes. We made it up over Trailcreek Summit in no time. We stopped a the top to figure out a plan of action. It was very busy. At least a dozen cars.

We decided to try and camp in near the Park Creek Campground and hike the High Ridge Trail. Park Creek is located a couple of miles past Trailcreek Summit on the left. It was 75% full. We checked out one of the sites but it was right next to a swampy pond and decided to forgo the bugs and try to camp down the forest road near the trail head.

The Subaru made it down the forest road (slowly) and we parked right near the trailhead.

High Ridge Trail goes for about 9 miles following a similar path as the Trailcreek road but further west and on the ridge of the mountains. It starts off down an old logging road and eventually climbs out of the trees and weaves up and down from ridges to valley floor.

Austin was happy to find water at both of the lower sections that we crossed. He splashed around in the streams and drank a ton. The flowers were amazing and there were even wild strawberries to eat.

We took the trail for just under 4 miles before getting to a great ridge top that had a great overlook of the Trailcreek pass as well at the Pioneer Mountains. We had just summitted Hyndman Peak the week before so we tried to pick it up from the line up.

We decided to set up camp just near the trailhead after getting back from our hike. There is a river a couple hundred yards from the site for fresh water and soaking your feet.

The campsite has a turn around and could accommodate larger vehicles. There are two fire pits but we didn’t use them due to it being over 90 degrees during the day and the high wild fire danger we are currently experiencing.

The campsite was much quieter than the pay to camp spot we stopped in earlier. We had a couple visitors swing by around dinner time to check out what was down the road or pop down to the river but after about 6:30, we didn’t see anyone.

There were a lot of bugs down by the river. Mosquitoes started to come out both at the river and at the site. I wrote this blog post from the shelter of the warm tent to avoid the swarms.