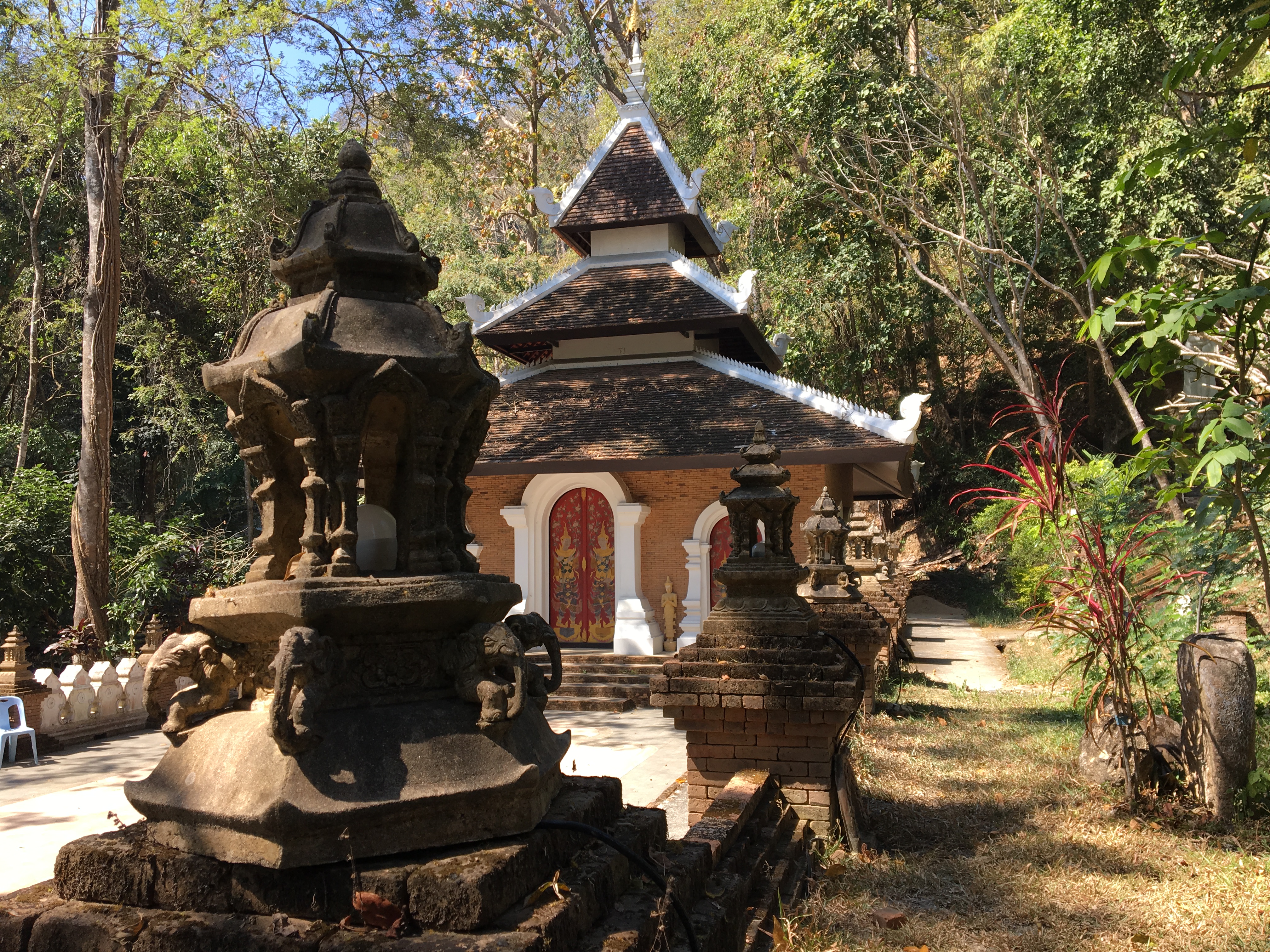 We have been visiting Thailand for the last week. We spent a couple days in Bangkok and explored some temples around the area. We then hopped down to Phuket and took in some sunshine and lounged on the beach. Finally, we’ve arrived in Chiang Mai. It’s a historic and holy city speckled with temples connected by narrow streets filled with hippies from all over the world. After our first half day of wandering around the old city, we decided to venture out. One highly recommended destination is Wat Phra That Doi Suthep. It’s a very important temple in Buddhism and the Chiang Mai area. It’s located on range above the city in Doi Suthep – Pui National Park.

We walked from our extremely calm and beautiful guesthouse over to the old city limit to Suthep Road.

It runs directly to the base of the mountain near the Chiang Mai Zoo. We talked to a taxi, tuk-tuk and a red trunk. The taxi was 160 baht (about 5 USD). The tuk-tuk wanted 350 Baht (10 USD). The red truck was only 40 Baht (a little over 1 USD). I tried to negotiate the tuk-tuk but he wasn’t having it. Without any city buses, the red trucks pick up the slack with a cheap alternative to other private transport. We heard some good and bad things about them. Sometimes they will wait to go until they are completely full; which some have complained has taken an hour. We had no problems and had the driver drop us off at the far western side of the Chiang Mai University.

We then followed the road that led along the 2nd entrance into the Chiang Mai Zoo towards Doi Suthep. The trail was well marked by monk robes and orange paint. There is signage at the trailhead that outlines the way up to Wat Pha Lat. At this time of year (mid-February), we had no issues with mosquitoes and it was very dry and hot. It was over 30 degrees Celsius so bring plenty of water. The trail was moderately difficult. It was somewhat steep at times. Expect to climb around 2,500 feet.

Once we reached Wat Pha Lat, we were impressed by the serenity of the temple and the monk living quarters. There are ancient monuments and shrines mixed with extremely modest huts for the monks to stay in. There was coffee and tea available for purchase as well as toilets. After changing into proper temple visiting attire, we had a snack and took in the different shrines and Buddha statues.

Once we had our fill of Wat Pha Lat, we continued on our way to Wat Phra That Doi Suthep. You’ll climb a small trail on the north end of the compound and up to the road that goes to Suthep. To your left the trail continues through the woods. It’s a bit steeper and in the sun a bit more but the trail is very direct. We encountered a couple groups of hikers going up and coming down. We heard and then spotted a whole family of monkeys in the trees on our way. Once we were near the temple, it was a bit confusing and we ended up in a local’s driveway where we were chased by some very angry looking dogs. We made our way through to the back entrance where we passed a group of young monks playing soccer in what appeared to be dormitories.
Although very beautiful, the temple itself is very crowded with tourists. It wasn’t overwhelming but differed greatly from the serenity of Wat Pha Lat. Entrance to the temple costs 30 Baht (1 USD) for foreigners. The temple overlooks Chiang Mai. It was very hazy due to the pollution of the city. Although you could see the city, it was hard to see very much beyond it. The shimmering gold structure in the center of the temple is the main attraction. After putting on our temple approved attire and taking off our shoes, we walked around the center courtyard and admired the gold monument. Practitioners purchased flowers and candles and prayed while circling the gold structure. I took a whole bunch of pictures.

We checked out the rest of the area surrounding the center courtyard and then made our way down the 300 steps to the base of the temple. Sarah made sure to knock the giant gong near the bottom and then we were on our way back to town. There was an army of red trucks waiting near the base of the stairs. We hopped on a truck that was loaded to capacity and made our dizzying way back down the mountain to Chiang Mai.

Overall, the hike was beautiful and exactly the right length for the humid and hot temperature. Although we preferred the serenity of Wat Pha Lat to the tourist riddled temple of Doi Suthep, I would recommend to anyone to make the journey. It was well worth the sweaty clothes.
Remember:
• Lots of water
• Temple approved clothing
• Enough Baht